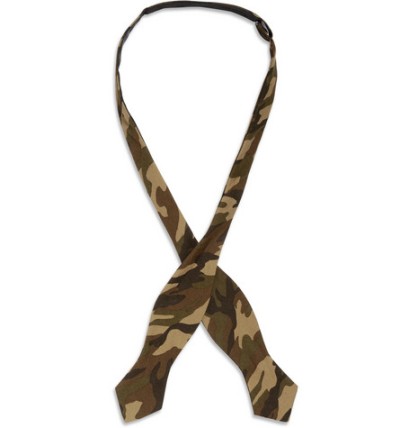 Seriously, if I had the omnipotent authority, I would ban all clothing with camouflage print that did not serve military purposes. Yes – I said it! Now, before I become inundated with a bruising flood of hate mail, allow me to first say this: I get it. I get that camouflaged attire, within the realm of fashion, is meant to be edgy. It is meant to brash. It is meant to be a form of eclectic rakishness that delivers a middle finger to established sartorial convention without a morsel of compunction. Or, perhaps, it is just meant to be fun and not taken too seriously. Well, whatever the reason is behind the sudden insurgence of this trend of the moment, it irritates me. You see, the thing with trends are that they are just that – trends. So, when you rock that camouflage necktie from 2013 in the year 2014, it is going to look painfully dated. Now, in the world of fashion for men, style changes very slowly. So, most shifts will be slight, and you should be able to extract some worthy longevity out of what is being offered today. However, camouflage, from bow ties to dress shoes, probably won’t produce much staying power. But, if you are a gentleman with an infinite, disposal amount of cash and can spring for some $500 camouflaged oxfords, or you have a modest budget and can grab something from Ebay or a thrift store, then more power to you. You just should be forewarned that you probably won’t be wearing it too long. And for many, that may be perfectly acceptable. But, for me, I’ll sit on the sidelines for this trend.