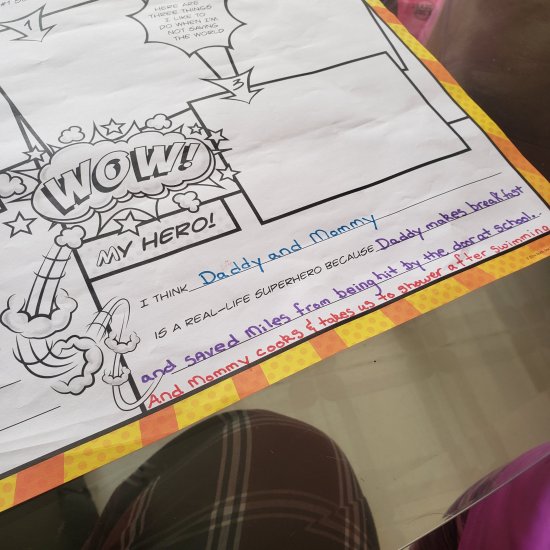 Nervously, I sat silently at the breakfast nook table awaiting an answer from my daughter. Ava was the Star Student of the Week, and the theme for this month was being a superhero. She was supplied with a poster with various blank sections that required fun, personal information about herself. There were sections that required a list of fun hobbies, an imaginary superpower, and the names of people in her super team (family members). There was also a section reserved for the identity of who was a superhero to her. I sat with her filling out each section. Finally, we arrived at the section that required the identity of her own superhero. And so, I asked the question and anxiously sat on the edge of my seat waiting for an answer. In popular culture, the role of the father is sometimes boiled down to an unaware nincompoop that faints at the first sign of a soiled diaper, is inept at preparing a decent meal, and is devoid of emotional intelligence that is essential for raising children.

Fortunately, young children are not well-versed in popular culture. They won’t succumb to the whims of societal pressure. So as I waited for Ava’s answer, I was hoping for some unbiased truth that wouldn’t sting too bad. Her choices were plentiful: Moana, Doc McStuffins, or any member of the PJ Masks super squad. Selfishly, I was hoping I would make the cut. To my relief, Ava revealed that my wife and I were her superheroes. As a parent, especially being a father, one only wishes that the job you perform as a parent is recognized on some level. To be loved, respected, and appreciated by your children is the greatest reward anyone can dare to hope. Through her lens, we were granted superhero status, and I felt joyous inside. So, I began to ponder what superpowers did I inherit after becoming a parent. I was able to readily identify five super-parent abilities. If you are a parent, you are probably familiar with the list below very well.

The Power of Persuasion

For more of my adventures, check out entries from my Daddy Diary for your reading enjoyment.