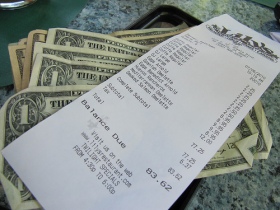 Today’s post is being penned on behalf of my brother-in-law who currently works in an upscale restaurant in Birmingham, Michigan. Finishing his shift for the night, he stopped by the house to say hello. Now, I am not exactly sure how we landed on the topic, but after some brief banter about The Walking Dead (great series by the way), we gravitated toward the subject of gratuity. Now, in the African-American community, we regretfully possess the dubious, notorious distinction of being dreadful tippers.

Yes, I have been eyewitness to my brethren running the wait staff ragged, ordering great sums of food, and then leaving a few dollars on table at the conclusion of the meal. And of course, the waiter/waitress becomes irate, thus setting the table for me to receive bad service because the wait staff is expecting the same treatment from me. Not good. Not good at all.

However, I think this exercise of bad tipping is more of an unfortunate learned behavior, and less purposeful arrogance or ill manner. Okay, there may be exceptions to that last statement, but I believe if individuals were taught the proper etiquette for tipping, my folks would not own such a terrible reputation. Here is the truth: More often than not, people tip what they think they can afford-not for the service they just received. They enter a restaurant to satisfy a hunger and quench a thirst. They pay the bill, and then they subconsciously start factoring in other monetary obligations: cable bill, gas money, phone bill, etc. They take a gander at their cash reserve and tip what they think what they can afford-not for the service just rendered.

Allow me to submit a bit of full disclosure: I didn’t learn how to properly tip until my early adult years. A good friend was kind enough to show me proper tipping etiquette. Because if you don’t know-you just don’t know. So, just how much should a gentleman tip nowadays? According to my brother-in-law, 20 percent of the total bill (excluding tax) is the going rate today for excellent service. I understand that some people still adhere to the 15 percent rule, but come on people, even minimum wage has increased since 1985.

Let us have another word on the matter of tipping at a restaurant. In a previous entry, I recommended that a gentleman should tip his server at least 20 percent on the meal, as 15 percent appears to be an antiquated rate in the eyes of the serving professional. Well, what if the service was not necessarily exemplary, but it was not atrocious either? In this case, 15 percent could be viewed as appropriate, or even if the meal occurs at a buffet – this rate should suffice. And with that being said, let us break down calculating a 15 percent rate. It’s as simple as computing a 20 percent rate. Same routine: move the decimal point one decimal spot to the left, but this time you want to divide that number in half, and then you add that amount to the amount you had after your moved the decimal point.

Now, I know you are thinking: “Why not just whip out the trusty cell phone with the complementary calculator built-in?” Well, not everyone has that capability; like the brother I saw today etching an invisible math problem with his finger as he calculated his tip. So, back to that 15 percent. Let’s say we start with a $50.00 bill. Move the decimal point (50.00 becomes 5.00), divide that amount by two (5/2 =2.5), and then add that amount to the amount you had after you moved the decimal (5+2.5=7.5). So, a 15 percent tip on a $50.00 bill should be $7.50. Now, for those pesky amounts like $74.23; I suggest rounding up or down to a whole number. Boom…tipping made easy.

So, let us revisit the burning issue of gratuity. The last time I posted about the delicate art of tipping, there were some gentlemen who believed it should be done, and then there were others who rejected the entire concept. So, what leads me back to this topic? Well, I’m reading this article online about a family that was locked inside a restaurant because they refused to pay the 17 percent gratuity on their bill. The police were called and they were kindly instructed to pay the balance. Now, I’m not going to speak about locking folks up inside your establishment – that seems pretty extreme in reconciling a bill. However, I am going to speak to bad restaurant service.

You see, the family felt that they had received bad service as they dined. And they were not happy that the restaurant imposed an automatic 17 percent gratuity for a party of 5 or more. However, the restaurant’s policy was stated in BIG BOLD print on the menu. I have to be frank, I’m not too sympathetic to people who eat all of their food and drink – only to stage a gratuity protest because they state that service was bad. Even if service was terrible, it’s not a good look to skip on a portion of the bill AFTER your belly has been satisfied. Not a good look at all.

Truthfully, you are going to recognize if you are going to have bad service not long after you meet your server. Has your server come to greet you? Have they taken a drink order? Have they NOT returned to take your food order? No? Well, there are appropriate measures one can take if the dining experience is less than stellar. If the service is that atrocious, simply ask for a manager and politely lodge a complaint. Perhaps, request a new server.

If you have worries about someone doing something wicked to your entrée, leaving the restaurant altogether would probably be in your best interest. And lastly, read the fine (and not so fine) print. Check out the restaurant’s policies before you start chowing down. Is there an automatic gratuity? What form of payments do they take? So, now you know. Signs of imminent bad service…bounce before you pick up that fork. Because if you try to stiff someone on the bill, you just might find yourself locked inside Benihana. 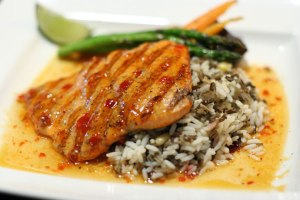 Word of advice: don’t, and we repeat, don’t go about ordering your lady’s meal when dining out at a restaurant. It is pretty presumptuous behavior to assume what her tastes are for the evening, even if you feel that you know her well. Trust this married guy, your lady has varying tastes that oscillate on the regular. At one moment her palate could welcome the taste of seafood, and the next, she is in the mood for pasta. Now, for us gentleman, we can order the same meal 5 consecutive times without blinking because we latch on to familiarity fervent stubbornness.

Nevertheless, let’s assume you would like to order your lady’s chow and it is perfectly fine with her. Well, here is how to properly execute the move without looking silly.

Boom – there you have it. It’s really a simple process. That’s how you safely order for Ms. Lady without the glares or choice expletives.

When meeting someone at a restaurant for a meal, being late is really bad form. True, sometimes circumstances cannot be helped. However, poorly managed time can be a problem, especially if it is a habit. It’s rude and inconsiderate towards the person or persons that you are meeting. Allot enough time that allows you to arrive at your destination with enough time to secure a parking space and walk to the building. If the restaurant does not take reservations; arriving early affords you the ability to place your name on a waiting list (if there is a wait) to be seated. Seems like a simple enough concept, but you are not surprised by dinner tardiness, because you’ve probably fallen victim to the truant offender. Don’t let that be you. Be on time. Your fellow patrons will appreciate it immensely.